Some wins & some fails but definite progress. I got all of the dress cutting done just in time to leave for an event, because it took me a while to think through the patterning & experiment with the smocking machine. The smocking did not go well.  I tried multiple times to smock fabric for the cuffs but every time I got to about the halfway point a needle would slip & they whole piece would go wonky.  The taffeta is not forgiving; one try & it goes to trash because there are holes from the needles & pinch marks from the feed gears. It takes time to rethread all those needles.  I have plenty of fabric but I don’t have time to fuss with it.  I cut out the whole dress as if I wasn’t going to smock anything & if I have time tomorrow I can try again & substitute the bits if they work. 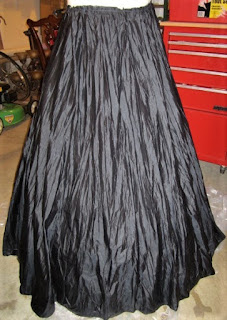 I bet you’ve never seen anyone pleat a dress this way. The taffeta has some sizing in it, so it’s holding the pleats nicely.  I wasn’t sure how it would look but the swatch test came out well.  I put a plastic dropcloth over the dressform wearing the hoops.  The skirt was mostly assembled, then soaked in cold water & wrung out carefully so that there are lots of vertical wrinkles.  It's draped over the hoops dripping out in the garage. Voila! Fortuny pleating. I won’t know what it really looks like until it dries overnight. The sleeves are also pleated & laid out flat to dry. Now it’s nearly midnight & I have one more day to pull this project together.

WHAT'S ON THIS BLOG?